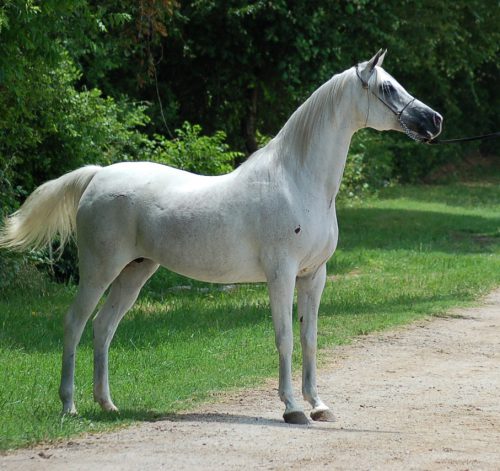 THE STORY OF HK CAMAYA

The breeder of HK CAMAYA, Howard Kale Jr. AKA Howie, founder of Karho, explains how HK Camaya was produced. Howie was visiting Mr. Knaap’s farm in Holland where he purchased the great son of *Salon, *Muslin. Mr. Knaap also owned three daughters by *Muslin out of the foundation Tersk bred mare *Panama of Tersk, who was living in Holland at that time (after being exported from Russia and prior to her importation to the US.) The best of these three daughters was *Camillaa. Howie bought *Camillaa as well and bred her in Holland to Antey (Aswan x Nemezida). Howie describes Antey as a beautiful, typey bay horse who was very correct, one of the five best sons of Aswan. Sadly, Antey did not survive the importation process of treatment for Piroplasmosis, so he had relatively few foals. *Camillaa arrived in the US in foal and result of this pairing was a grey filly, *Camaay, dam of HK Camaya.

HK Camaya, while never shown, is described by Howie as one of the superstar daughter of *Muscat. The importance of her presence on the pedigree of PA Marco is inestimable.